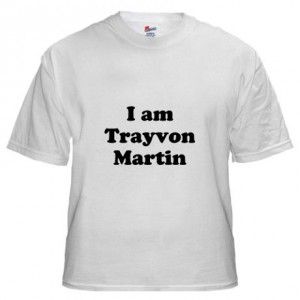 This is an interesting way, by the grieving family, to preserve the memories of Trayvon Martin (RIP), the 17year old unarmed black kid shot by an overzealous self designated neighborhood watchdog, George Zimmerman (White &/Hispanic). Abovethelaw.com debates the issue:

“The shooting has picked up national attention, and it’s shedding yet another ugly spotlight on race relations in America. I’m on the same page as Elie regarding most of his frustration. But earlier this week we learned that the slain teen’s mother had filed a trademark application for “I am Trayvon” and “Justice for Trayvon.”

Elie thinks, in a nutshell, that this is a good and proper strategy to preserve Trayvon’s memory and prevent random people from profiting off of his death. But I have to disagree. I think his family members are wasting their time and energy.

Keep reading for details on the trademark applications. Grab a Coke and a bag of chips, and watch the two of us digitally duke it out in today’s ATL debate….

Here is the relevant section from Central Florida News 13:

Tuesday an attorney for Trayvon Martin’s mother says her pursuit of a trademark for slogans containing the slain teenager’s name is to keep people from exploiting the boy’s name.
Monday News13 first reported that the

U.S. Patent and Trademark Office filings by Sybrina Fulton are for the sayings “I am Trayvon,” and “Justice for Trayvon.”
The applications, filed last week. A representative for Fulton says the trademarks were not filed for “profitable purposes.”
Now, on to the debate.

The problem here is that filing a trademark application is not worth the time, or the effort, or the money for Martin’s family. I understand Fulton is concerned about people exploiting her son’s memory, and I know the intellectual property regulatory system is one official way to prevent others from doing just that. But I really don’t think anyone is going to make any significant profit off of Trayvon t-shirts. And, even if unintentionally, Fulton’s filing automatically raises questions about her motivation, regardless of whether she’s actually trying to profit from the trademarks.

Even so, the family will almost certainly not have the resources to enforce the trademark. They will not be able to do anything about Times Square street vendors — who mostly sell copyrighted stuff anyway — or other independent t-shirt makers. And I am pretty sure Urban Outfitters is not going to try to cash in on this.

Just because Sinbad wore a Trayvon shirt on a morning show doesn’t mean people are getting rich off of Trayvon’s name.

Above the Law has the full story.