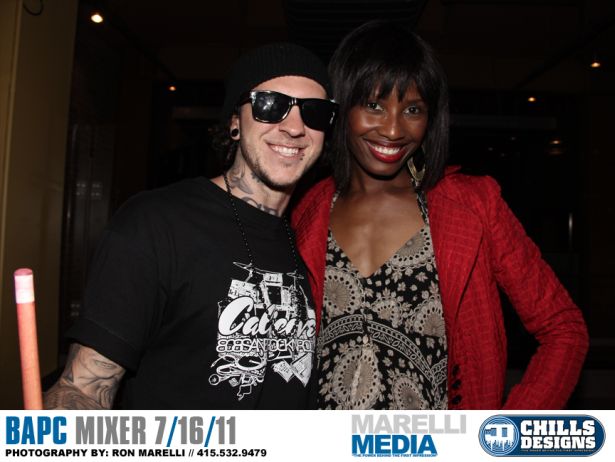 Greetings folks. I hope my blog post finds you all well. I had the privilege of being invited to attend the Bay Area Producers Conference Mixer 2011 at Thirsty Bear in San Francisco this past weekend. The event was actually held on July 16th, 2011 from 7pm-10pm. I arrived intrigued to see how the evening would shape up. Upon entering the venue, I was immediately convinced it would be a nice evening. The mixer was held in the upper far right corner of the Thirsty Bear restaurant, in one of its larger rooms. The room was not packed.  It had just the right amount of people, leaving room for folks like myself who love to comfortably move around to do so and meet new people. In comfortably moving around, I met three really cool emerging musician groups I want to introduce you all to. Bookmark this post  because they have the superstar “it” factor and it is just a matter of time before they make it big. Oh! Thank me later. 🙂

Actually before I make my introductions, a BIG shout out to my entertainment law colleague Jon Dunman. Jon has been at the entertainment law game for a minute and has brokered deals on behalf of his clients dealing with some of the biggest names in the music  industry. Jon made me break into one of my signature grins and then erupt in laughter when he informed me at the BAPC event that he was a regular visitor of UDUAK LAW FIRM Law blog. “Wuuuuuuuuuut?!” He even went into details on some of the content I have shared with you all in the past. *BIG SMILE. Y’all need to stop.* Thanks Jon. You made my evening. 🙂

Now most who follow my work know I LOVE emerging creative professionals.  I am particularly passionate  about giving visibility to talents that are above par AND bring nothing but their “A-game” to the mix, from Africa and the Bay Area (USA). As far back as I can remember, I have enjoyed sharing, promoting and exposing emerging creative professionals in music, fashion and film to fellow game changers &/or movers and shakers so they can help push the careers of these dynamic talents to the next level. So, I am really excited to introduce you all to these three talented groups that made an impression on me:

1. Nate Beats- Music Produce/Musician/Director of NARIP, San Francisco Chapter: Nate looks like he could easily be 18years old.  But based on his accomplishments, he is definitely older. Right from when I began speaking with him,  his drive, passion and focus was compelling. It turns out he is a music producer and a musician among the many hats he wears. Nate  studied under American Idol’s Simon Cowell, followed by Musician’s Institute of Music Business and he is really ready to take on the world. He has created music for Nintendo, Adidas, Sun Micro Systems and has completed production of over a dozen commercial independent hip-hop albums.You can learn a lot about Nate on his website and listen to some of his dope beats- http://www.natebeats.com. The sky is really the beginning for this talent.

2. Epic & Rare: I’d like to think I am very comfortable in my skin. So, when I attend events, wherever they may be, I don’t wait for people to come say hello to me. I survey the room, make a decision on people I feel might be interesting to engage in a conversation with, approach and strike a dialogue and 10 out of 10 times, I get it right. Epic & Rare was the first  group  I approached at the BAPC event for the evening.  The group is made up of four guys:  Justin Kase, Ray Cuevara, Trell and one other artist whose name escapes me. Between the four, two were producers and label owners (Justin Kase and Ray)  and the other two were artists on Justin & Ray’s  label. Like Nate Beats, these guys looked quite young, definitely not more than 23-25years old, if not much younger, but they had an entrepreneurial spirit about them and had their act together.

Epic & Rare had their latest  mix tape album titled Epic & Rare. The packaging and presentation showed they had given much thought to their image and image branding. They were professional and articulate and came to the mixer with  a sense of purpose. We chatted about music and as  I prepared to say goodbye so I could meet more persons, they offered me their CD.  I looked at it skeptical. “Is it above brilliant?” I asked. I tend to be a very straight to the point person. “I don’t touch  music unless it is brilliant,” I added as I had my hands held waist level with my palms face down, while taking a slight step back, to show I was unwillingly to even allocate my already overstretched time and hectic schedule to listen to less than stellar music.  “We are Epic & Rare,” is what all chimed in to tell  me.  “It is really good. We will not waste your time.”

It turns out, they were right! While lyrically speaking, I personally could do without the profanities etc. used as it is not my personal style, there was no denying the  group was VERY talented. I listened to the whole album and from the first track titled “Flawless,” the production quality was above and beyond par. The talents can “spit” i.e. rap  as they say in hip-hop. They have the formula for commercial success and their drive and work ethic as demonstrated with their mixtape is impressive. For brand longevity, however, once they really make it up there, they will, as they mature as a group, need to create lyrics that go beyond your typical  hip-hop teenage “I can get any chick I want” and “I am better than you”  bragging rights music. Truly tried and tested. It will sell CDs but I believe in making a body of creative work that outlasts one’s legacy. Trendy today gone tomorrow is fine if you are an artists looking to just make some quick money. But if you are passionate about the music and the craft, then you make solid music. This comes from personal experiences and clearly as very young people, Epic & Rare will need the time to find their own voices so they can tell their own stories. #Potent epic  take over when that happens!

3. Calicove: I wrapped up my evening at the Mixer speaking with Travis, one of the lead singers for Calicove who was present at the event.  Where Epic & Rare lacked in maturity, in terms of lyrics, Calicove filled the gap. Their songs, I think, would resonate with both old and young.

Now understand this folks, while Travis was covered up in tattoos when I approached him, there was nothing about him, to me, that stood out, per se.  Tattoos, decades ago, used to be this novel idea. Now, especially in music, the more artists try to distinguish themselves with tattoos, the more they all end up looking alike. Nevertheless, there was something unique about Travis . . . First, as one who is also a fashion lawyer, I noticed the cool Calicove t-shirt he was wearing. Second, there was a very unique energy about him and when he told me his story and that of his  his band, I could place the energy. Travis whose stage name is “Authentic” is a member of an ethnically diverse band that combines rock & roll with hip-hop. They are already filling up local venues  in the Bay Area and with the talent they have, I won’t be surprised to see them at the top, very soon. There is a nice interview Brickhouse Talk conducted on the band  that best captures the essence of Calicove and you all should read it.

You should also check out the following songs from the two groups below:

1. Calicove: Won’t Do That For Me-This song I think is a hit. Definitely one of the strongest from the group and also touches on a theme all can relate to- relationship gone bad.

2. Calicove: Space talks about how relationships go from great to bad to “I want my space. ” My favorite line, “you wanted space so I gave you NASA.” Clever!

PRODUCER PLUGIN- I highly recommend all artists reading this to contact Justin Kase at twittercom/justinkasemusic to work with him. He is very talented. Also check out twitter.com/rayguevara, the rapper on ‘Flawless.’

Alright folks! I am done putting the Bay on the map. Check out all these talents and when they make it big, I’ll return to say, “I am always on the money like in God we trust“ as one of smartest hip-hop lyricist I know, X.O Senavoe, puts it. 🙂

Photocredit: Shout out to Ron Mareli for sneaking up on Travis and I and grabbing this shot. Now I’ll be famous on TV 🙂