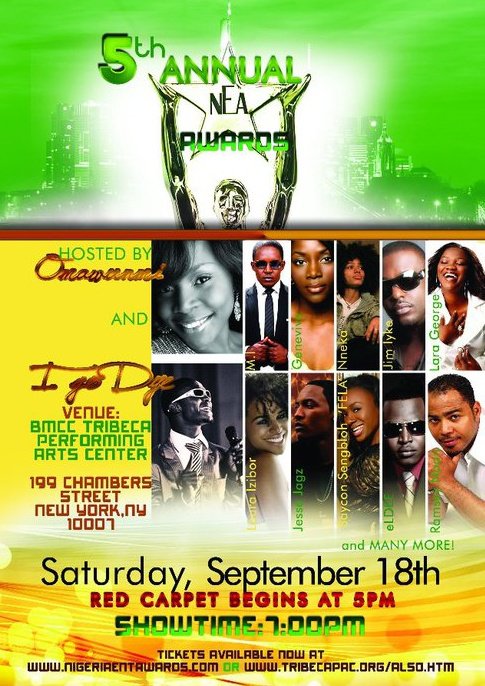 When I returned to the USA in 1991, it used to be a GREAT thing when Americans discovered that I was Nigerian. There would be an initial pause followed by, “Oh my friend, neighbor, brother-in-law, sister-in-law etc is Nigerian.” What would follow would be subsequent positive encounters and dealings with Nigerians: their intelligence, hard-work etc. Over time, that has changed. Now, I get, “Oh, you are Nigerian. Isn’t that where they are constantly scamming people.” Apparently most Americans saw the 60minute feature on the “mugus” that fall at the hands of Nigerian 419 scammers.This is followed by a sympathetic “I feel your pain” comments to me as I am subjected to questions about Christian v Muslim conflicts, corruption etc.

I am excited to tell you I will be the official host on the red carpet at the 2010 Nigeria Entertainment Awards (NEA) to be held in New York City. The NEA celebrates and recognizes the achievements of Nigerians in the fashion and entertainment field, globally. I hope you plan on attending as I introduce and you get to meet some phenomenal Nigerian fashion and entertainment personalities who dispel the negative images of Nigerians that is now common place in America.

For example, meet  Laura Izibor (Nigerian/Irish) who is making waves worldwide with her music, Nollywood actress Genevieve Nnaji featured on Oprah, Nneka who is proudly Nigerian  and appeared on the Jay Leno show and 2010  BET nominated rapper MI, among many.  Read the press release below and hope to see you there!
_____________________________
(New York, New York, August 19th, 2010)— Nigeria Entertainment Awards (NEA) announces Uduak Oduok will host its 2010 NEA Red Carpet Awards. The NEA celebrates and recognizes the achievements of Nigerians in the fashion and entertainment field, globally.

This year’s event takes place as Nigeria, the largest country in the continent of Africa, celebrates 50 years of independence from British ruling.

“I am thrilled and honored to be NEA’s 2010 Red Carpet host,” said Oduok. “Nigeria remains very  relevant, globally, inspite of its problems. I look forward to sharing the country’s remarkable entertainment and fashion personalities with America and the world!”

Uduak Oduok recognized as a brilliant visionary, especially on Africa’s emerging global fashion and entertainment markets, is a US based fashion model, attorney, journalist and publisher.

“We are excited Uduak will be NEA’s official red carpet host for our 5th Annual event this year,” said Tope Esan, Co-Founder & Executive Producer. “Uduak’s love for diverse cultures, her versatility and influence in the fashion and entertainment industry (within and outside Nigeria) makes her a natural fit.”

Artists and entertainers at the NEA Awards will be recognized in seven categories this (music, radio, film/TV, fashion, comedy, entertainment promotions, other entertainment) year.

ABOUT NIGERIA ENTERTAINMENT AWARDS
The Nigeria Entertainment Awards is annual event in the United States that recognizes the outstanding achievements of Nigerians in music, film, TV, comedy, fashion and radio, globally. The award ceremony features performances by prominent Nigerian and international artists. Established in 2006, the NEA is passionate about promoting Nigerian and African entertainment and using its platform to educate and address issues about Africans and friends of Africa in the diaspora. For more information, visit www.nigeriaentawards.com﻿