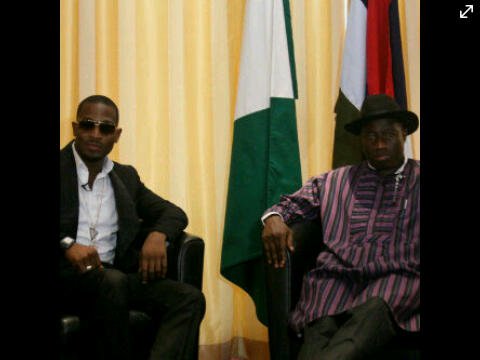 Where did we leave off? The conversation is always ongoing on UDUAK LAW FIRM BLOG. So many legal issues to explore in the phletora of daily news and pop culture. This discussion is a little off the beaten path. It is where  music meets politics. The age old question of what role musicians ought to play when a candidate is running for office presents itself in Nigeria.

I was on my Facebook (FB) page yesterday when I saw a recent law graduate “FB friend” of mine post an updated status on current Nigerian President Jonathan Goodluck. She was disappointed that the Nigerian President refused to honor the request of young Nigerians to join in the country’s first Presidential youth debate tagged “What About Us” yet he permitted a pop star, D’Banj, to interview him.

Let’s get a few things straight right off the bat. Mr. President if you are reading this which I anticipate one of your staff members will, on your behalf, since you are social media conscious, this is absolutely ridiculous and makes no sense. You do have an obligation to the youths of Nigeria to engage in a debate about their future. Questions on your political agenda as it affects youths i.e.  healthcare, education, jobs, electricity and other key issues must be answered.

Having said the above, my attention turns to the second question raised and that Nigerians are debating at heat temperatures. The question is whether D’Banj is qualified to interview the President of Nigeria. For me, this is open to debate. I do really think, why not? Who makes the rules that a musician should/or cannot interview a president on issues that concerns youths in the country of which he resides? Remember this has no bearing on the President making his own personal decision to not be involved in the What About Us Presidential Youth Debate.

There are many sides to this debate and I intend to take them on.  I get right into it.

First, to have a debate, there must be some context laid out. It is hard to know what pop star in the USA, in terms of wealth, to compare Nigeria’s D’Banj to. I am unsure what his actual net worth translates to in dollars and would rather not speculate. But, suffice it to say he owns numerous business ventures: reality tv show, branded mobile phone, branded water, branded food product, several million dollars endorsement deals and the list goes on.

D’banj for all intended purposes is not somebody most Nigerians and certainly I would affiliate with politics or invite to interview a President. I just won’t. His personal and professional brand successfully marketed to the public is all about sex. End of story. Really, what has sex got to do with politics, beyond sexual political scandals?

As a musician D’Banj has been successful in selling to Africa a brand that is devoid of any intellectual thinking or socio-political consciousness. Unlike other artists within Nigeria such as an artist called Eldee who cover the gamete, D’Banj is a sex sells kind of guy. He coined the term “Koko,” “Kokolette,” and “Kokomaster;” all sexually suggestive words. His most recent song of which he did a remix with American rap artist Snoop Dogg is titled “endowed.” Try guessing real hard what that is all about? If you said “sex,” pat yourself on the back. No brainer, right? So, what qualifies this seemingly non-intellectual musician to ask questions on behalf of Nigeria’s youths? There is a question in the Nigerian Pidgin language that people asked when I was growing up in Lagos, Nigeria when they questioned your audacity to do something you should not have done. It went like this, “who died and made you God???!” The same question is posed here. Who died and made D’Banj God? His audacity to attempt to speak on behalf of Nigerian youths. Like seriously? Because he is a star??

D’Banj has had many opportunities to present himself in an intellectually capable front where his recent move in interviewing the President could be welcomed. He has failed to do so. On the contrary, when he is asked about business, he consistently defaults to his business partner and fellow musician Don Jazzy as the authority on what keeps his music label and other business ventures profitable. So, the obvious question becomes, what qualifies D’Banj as the authority and spokesperson for youths and why is he interviewing the President of a huge nation like Nigeria with huge problems during a critical election cycle?! *Confused face*

Then, there is the other side. *The straight face* Why not? Who says musicians cannot and should not be involved with politics? What ridiculous rules?! Musicians can and do create a sense of culture around the ongoing politics. If musicians engage politically, their fans, millions of whom are youths will most likely also engage in the political process. In a country like Nigeria, it almost becomes critical that musicians use their popularity in getting youths to register to vote and to turn out voters. Objectively, we certainly want musicians to be educated about the candidates they endorse etc.

Back to D’banj, to be as successful as he has become means he does have the business acumen, even if he defaults to the designated spokesperson from his camp, for PR purposes,  to discuss his label and business ventures. Further, so he sings songs that are sexually suggestive, does that make him less qualified to ask questions about issues that affect him and the rest of Nigerian youths? In the USA and worldwide, Jay-Z is touted as this really smart business man. While Jay-Z is no doubt smart and successful, don’t forget he made his money off music he created with the “N” word and “B” word. He has since maintained his stance in continued use of the “N” word but regrets his representation of women with the “B” word. So, if Jay-Z interviewed Obama and asked some political questions about his vision for the country in 2012 would that be a crime? Nope. I think he would permit Obama to connect with a lot of youths, especially black youths. Beyond Jay-Z there have been many musicians that have used their star power to support causes and political candidates (it has been controversial also): Russell Simmons, Cold Play’s Chris Martin, Dixie Chicks, Bono, Willie Nelson and the list goes on.

In this instance, D’banj’s music directly connects with Nigerian youths. Also, his focus is to bring a larger voter turnout. For decades now, generations after generations, the Nigerian government has failed its youths miserably. The situation really is alarming and if youths were so inclined, we would have a revolution like the one that just took place in Egypt. Youths as a result of a failed government, have for decades, checked out of the political process BUT they will buy a D’Banj CD. What is wrong with D’Banj leveraging his brand power and urging youths to get involved in the political process to hopefully pick the right candidate and change their reality? I fail to see it and I am no “koko” or “kokolette” music fan.