Ah yes! I have been meaning to write about this and this is the perfect time. *Rubs hands together, rolls sleeves, ready to dig in!* The folks over at The Times and THR.Esq., among many, announce that ex-USDA employee Shirley Sherrod just filed suit against political blogger Andrew Breitbart for defamation among the various causes of action(s) pled in her complaint. THR,Esq.also referenced a quick analysis authored by one of their  legal correspondents Matt Belloni. Here is what Belloni had to say last year when the news broke out:

“Shirley Sherrod says she’s going to sue blogger Andrew Breitbart for posting a video clip of one of her speeches that purported to show she was racist. We’re not sure we see the point. Even if she can show she was defamed and/or portrayed in a false light, and even if she can show that Breitbart acted with actual malice (a tough hurdle), what can she possibly win in court? She was offered back her job at the USDA, which undercuts any damages claim. It’d be a PR victory, but she’s already won that battle.”

Belloni makes some very valid arguments.  Also, as an aside, this case is very important because it really is where we begin seeing social media meet the law. Do the same rules apply to social media users, in this case bloggers, as it does our traditional definitions of a  journalist?  How far are we willing to extend the definition? Should bloggers include fans on twitter or Facebook?  I wonder if you are a fan of a star on twitter and you are ticked off about his/her behavior and say something really bad and false. If you hit the tweet button and it  is published and retweeted gazillion times, are you liable for your statements? How does the law handle new media? Either way, while you ponder as I do, often, many of the legal nuances and issues in our interesting world, let’s delve into the matter at hand, shall we?

The “Legal speak” Brought to the Forefront
Defamation

Defamation: To win her claim here, Sherrod has to show:

2) The statement adversely affected Sherrod’s reputation. How do we know this? The White House called and fired her “forced resignation”! Let’s not get into how reactionary and downright ridiculous that firing was. Like, no due process? Are you kidding? To add insult to injury, the NAACP distanced itself from Sherrod and the list goes on.

Now ordinarily, if Sherrod was the “average Jane,” her lawyer(s) would pack their bags and go home because they have done their job. BUT, since we are dealing with a public figure/OR a person in a position that involves the “public concern;” this means Sherrod has to prove the statement was actually FALSE; AND the false statement was the FAULT of Breibart.

Malice: Belloni notes Sherrod would have a tough hurdle with the malice element if she sued. As a public figure or a person involved in matters of public concern, Sherrod must prove “malice” as one of the  elements of a defamation claim. The UNITED STATES SUPREME COURT (drum roll for the justices in DC) has set a very high bar for showing malice where we have a public figure/persons like Sherrod whose position involves that of “public concern.”

The Supreme Court essentially has said , “look, Sherrod you have to show “clear and convincing” (the standard is as high as a ‘beyond a reasonable doubt’ standard in criminal law) proof that the statement Breitbart made was made with malice.” See why Belloni says, why bother suing?

How do Your Prove Malice?
A seminal (that means in lay terms we lawyers quote the living daylights out of the case in litigation) case that speaks to the elements of malice is New York Times v. Sullivan. Decided by the Supreme Court, the case essentially said, “look, you can’t just waltz into court as a public figure and claim malice. You are a public figure. People will “hate” on you. Deal with it. If you still insist on your claim, then you have to show:

This element is very tough to prove. Seriously, it is not as easy as screaming *in a Tom Cruise A Few Good Men voice,* “HE WAS RECKLESS!” Nope! Sherrod has to show that when Breitbart was going to blog and make the statements he did about her, he entertained serious doubts that his statements were true. If you are thinking, “HE WAS HATEFUL, AND EVIL AND WANTED TO HURT AND DID HURT HER, LIKE REALLY BAD!” Too bad, so sad.

You sue, if you are Sherrod, as a matter of principle. It is not always about the money. Also, regarding the PR end Belloni mentions, I am not so sure I’d call that a win. Either way, she is now this stigmatized “racist” who was later exonerated, something she has to live with for the rest of her life. *Yes, we get dramatic because it is that dramatic. There will/should be “controlled” yelling  in front of the jury!*

Let’s see how this one turns out! 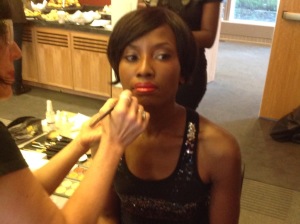